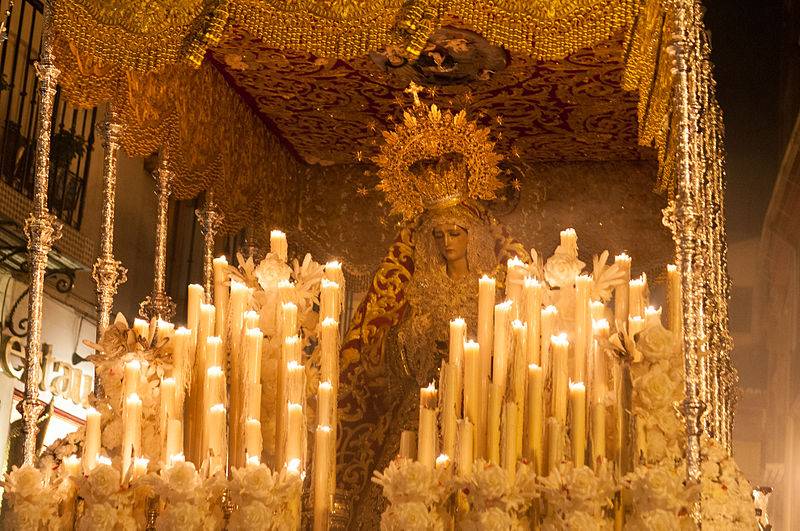 Semana Mayor, Holy Week is undoubtedly the most important week of the year in Andalusia and especially in Granada. Declared a Festival of International Tourist Interest

Semana Mayor, Holy Week is undoubtedly the most important week of the year in Andalusia and especially in Granada. Declared a Festival of International Tourist Interest, each year coinciding with the first full moon of spring, Granada becomes the Jerusalem of more than two thousand years ago. Its architecture, its neighborhoods, its corners, squares, streets are the best scenario where to relive every year the passion, death and resurrection of Jesus. Granada was always a city of artists, cradle of important schools of painting and sculpture that had their biggest push in a popular devotion materialized in dedications so beloved and venerated for generations and generations of Grenadians. The greatest example is found in the devotion that every Grenadian will always carry in his heart since he was born and which dates back to his presence in Granada in 1492, when Queen ELIZABETH begins to worship in our city to the advocacy of Our Lady Lady of Sorrows.

The history of art in Granada from the Renaissance through the Baroque and reaching our days, goes out into the street every year and Granada becomes a large open-air museum, something alive that over the centuries has not lost nothing of that popular devotion that was born centuries ago the first grenadine brotherhoods. Artists such as Jacobo Florentino, José Risueño, José de Mora, Torcuato Ruiz del Peral or contemporary artists such as Espinosa Cuadros, Miguel Zúñiga, Sánchez-Mesa and many others, came the images that every Easter we enjoy in our streets. Goldsmiths, embroiderers continue to do their good work in each confraternity.

The cathedral becomes the epicenter of everything, there will arrive each of the 32 brotherhoods to make public penance station, but both the exit and the closure of each procession are the neighborhoods of the city who take all the leading role. Each neighborhood has its own stamp: the Realejo, the Albaicín, the center, the Zaidín, the Sacromonte or the Alhambra.

Visiting the Alhambra with us in the morning you will have the afternoon free to live the PASSION that these days Granada lives. From Palm Sunday the Borriquila and the Virgin of Peace by the Arch of Elvira, the Sentence and the Wonders by the Race of the Darro, the Dinner and the Victory of return to its Santo Domingo temple, the Captive and the Incarnation coming out of the Sagrario and El Despojado by San Antón street. 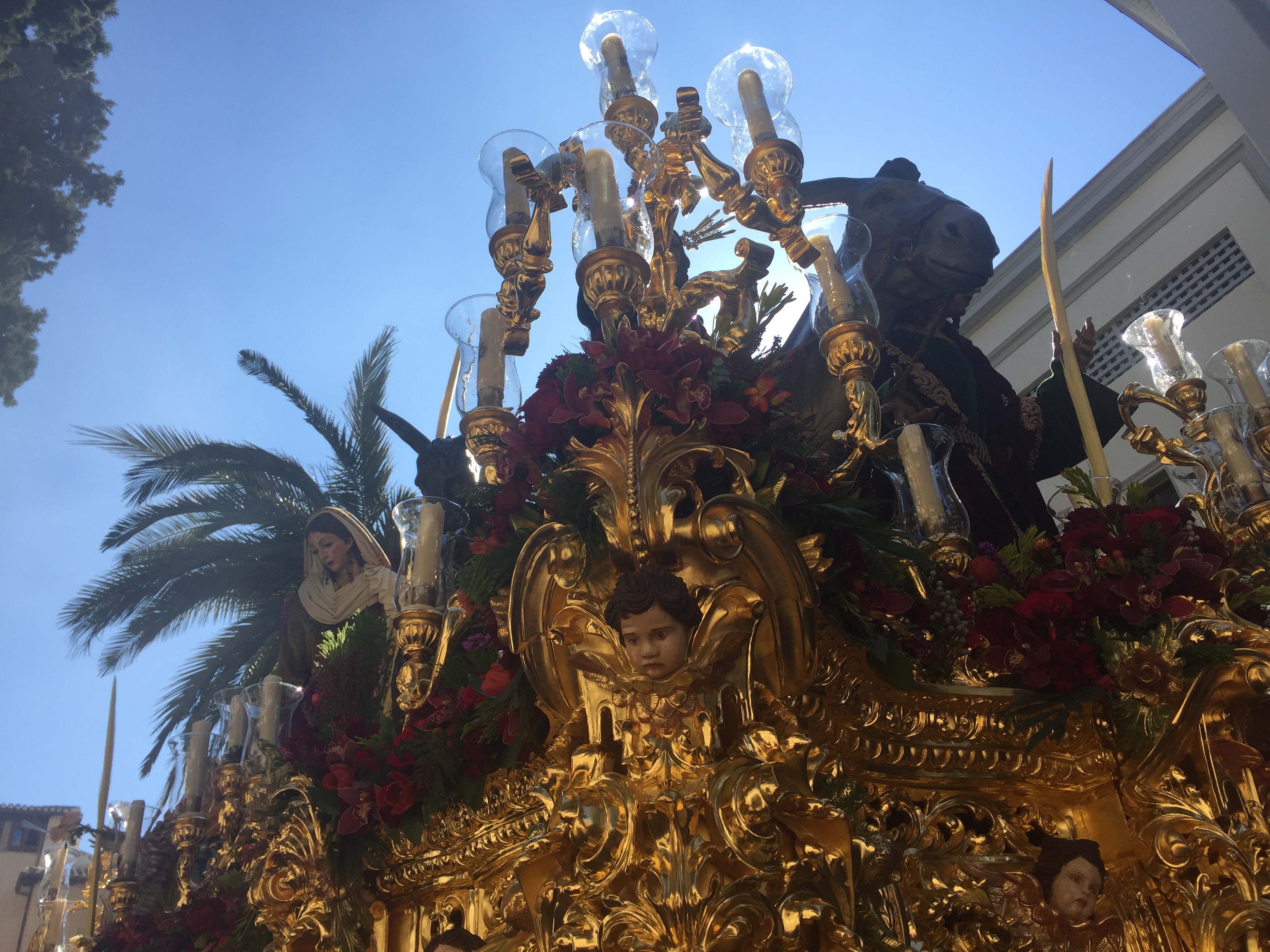 Good Monday is the day of Rescue, the Lord of Granada. The Huerto de los Olivos (Olive tree garden) and the Virgen de la Amargura, do not miss them for their neighborhood El Realejo, by Santiago street back. The Virgen de los Dolores by the Carrera del Darro. From the Zaidín a young brotherhood comes to the one of the Christ of the Work and Our Lady of the Light, a marvel to see how the people of the Zaidín fire them to teach to all Granada the devotion of a neighborhood. And when it is already night in Granada, Good Monday closes with the Holy Crucifix of Saint Augustine and the Virgin of Consolation, the first crucified that will come to our streets every Holy Week and the oldest in the city: the saint protector of Granada. 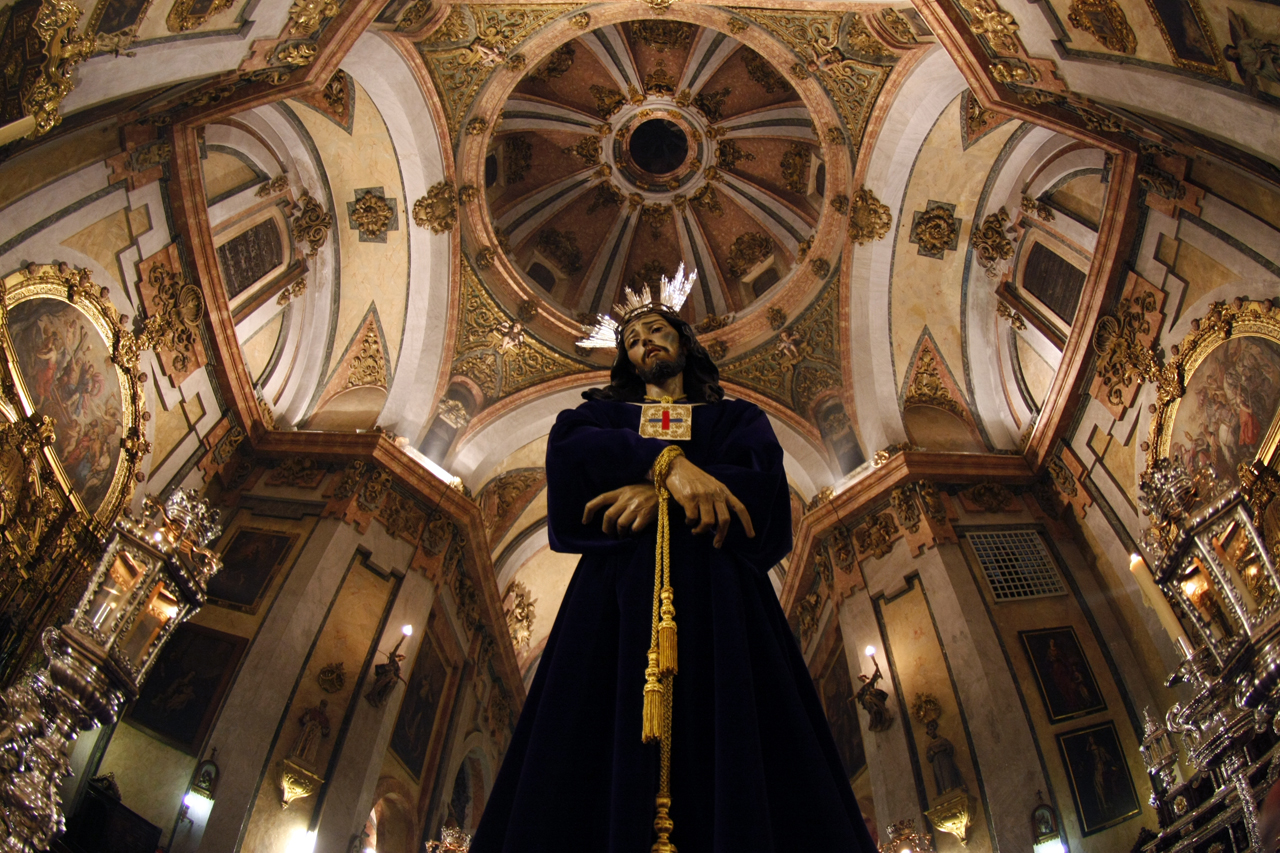 Good Tuesday, the streets smell like pestiños and all of Granada hopes to see Esperanza coming out of Santa Ana together with the Cristo del Gran Poder. The Via Crucis and the Virgin of the Kings descend to Granada from San Juan de los Reyes. And again two other neighborhoods take center stage of the day. The Realejo: with the Lord of Humility and the Virgin of Solitude and the Zaidín with the Lanzada and the Virgin of Charity. 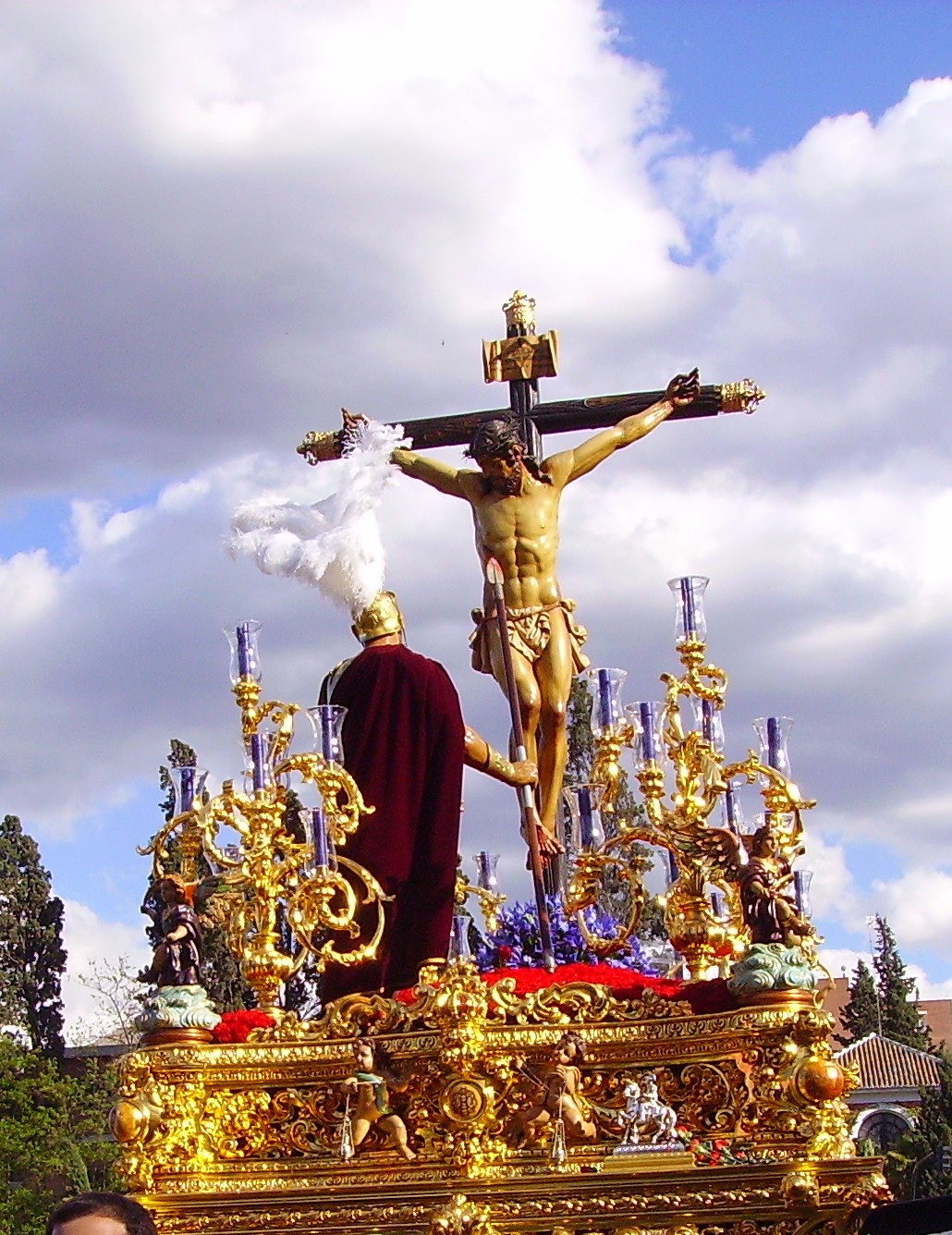 Good Wednesday and the Gypsies, the Christ of Consuelo and Holy Mary of Sacromonte, is undoubtedly one of the most significant brotherhoods of the city. Do not miss it when you return to your neighborhood, the Sacromonte. The gypsies in their path light bonfires, sing, dance ... the caves of Sacromonte and their Christ of the Gypsies.

The Sorrows, the Brotherhood of Patience and Sorrows, the best time to see it: leaving the temple, the Imperial Church of San Matías. The exit is complicated by the stairs with which the costaleros are nothing else put on the street. La Merced and the Nazarene returning to their temple through the streets between their house and Reyes Católicos street. The students leaving San Justo and Pastor. And Realejo Tres Caídas and Rosario, look at each detail of their belongings and how they are put on the street.

To speak of Maundy Thursday is to speak of the Albaicín, of the five brotherhoods of this day, four are from this neighborhood. The fifth will come out of the Zaidín: Christ of the Redemption and the Virgin of Health, the Salesians. From the Albaicín, the Aurora, the Estrella and the Concha. With time, go up to the Griffins of San José to see the Brotherhood of the Christ of Perdón and María Santísima de la Aurora pass by there, out go with time are narrow streets and there will be many people, it is not easy to take a good place. You will hear the albaiceneros shout beautiful to the Aurora in its blaze pallium. Aurooooooora, beautiful, beautiful and beautiful! Back to his temple the Star and Our Father Jesus of Passion, going up the hill of Alhacaba to the Plaza Larga and from there to his temple, San Cristóbal. And of course the exit of the Concha and the Christ of Love and the Convent of La Concepción. 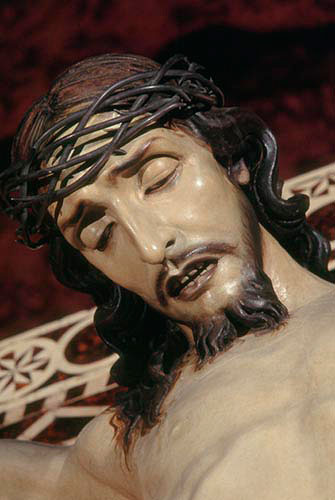 At midnight begins on Good Friday and in the Carrera del Darro and throughout Granada the lights go out, comes the Brotherhood of Silence, the Christ of Mercy work of José de Mora (XVII Century). Enjoy the Carrera del Darro but go there several hours before to try to catch a good site. Darkness and silence fill everything, a silence only broken by a hoarse drum that accompanies the passage.

If you want to know something unique about our Holy Week, you will live it at 3pm of Good Friday, in the Campo del Príncipe, in the Realejo, at the foot of the Cristo de los Favores. All of Granada gathers there waiting for the ninth hour when the sound of a bugle announces the death of Christ. There is silence and Granada prays.

An act of faith of an entire city. Already in the afternoon the Piarists, the Christ of the Expiration and the Virgin of the Greater Pain. A good time to see it, its exit from the Paseo de los Basilios and on the bridge crossing the river Genil towards the Carrera de la Virgen. The Brotherhood of the Railwaymen, the Christ of the Good Death and the Virgin of Love and Work come out of San Juan de Letrán and a good place to see it is on the Avenida de la Constitución with Sierra Nevada in the background. From Santa Ana comes the official Brotherhood, the Holy Burial and the Virgin of Solitude, beautiful carving of José de Mora. From the Monastery of San Jerónimo, a very peculiar brotherhood, Las Chías. The Virgin of Solitude and the Descent of the Lord. What are the Chías? Come to see this brotherhood and you will discover it, you will hear the children shouting Chiaaaaaa tocaaaaa !!!. When the night falls and already back to your temple look for the Brotherhood of the Christ of Favors and Mary Most Holy of Misericordia (la greñua) by the Plaza del Realejo, you will live what is a neighborhood waiting for their Christ and their Virgin to return to the Cathedral. Get into the noise, in front of the Virgin walking backwards looking her in the face.

On Good Saturday there is only one star, María Santísima de las Angustias of the Crowned Alhambra who, from her throne in silver that reproduces the arcades, the Patio de los Leones (Lions courtyard) leaves the Alhambra to go down to the Cathedral. The bell of the Candle in the Alcazaba rings while the Virgin passes through the Puerta del Vino. It is lovely to see her coming out of the Door of Justice.

And when everything seems to end, it is when everything begins, on Resurrection Sunday. There are two brotherhoods in Granada with the advocation of the Resurrection of Christ, the one of the Vergeles (orchards) next to the Virgin of the Triumph and the one of the Regina Mundi with the Virgin of the Alegría (happiness). But in the morning you will see how the city is flooded by the sound of little clay bells that all the children of Granada chime incessantly announcing the best news: Christ has risen. You will find yourself in the center of the city with a procession in which all are children, even the image that is being paraded: the facundillos.

And Granada will be awaiting, awaiting a new spring, a new Holy Week.