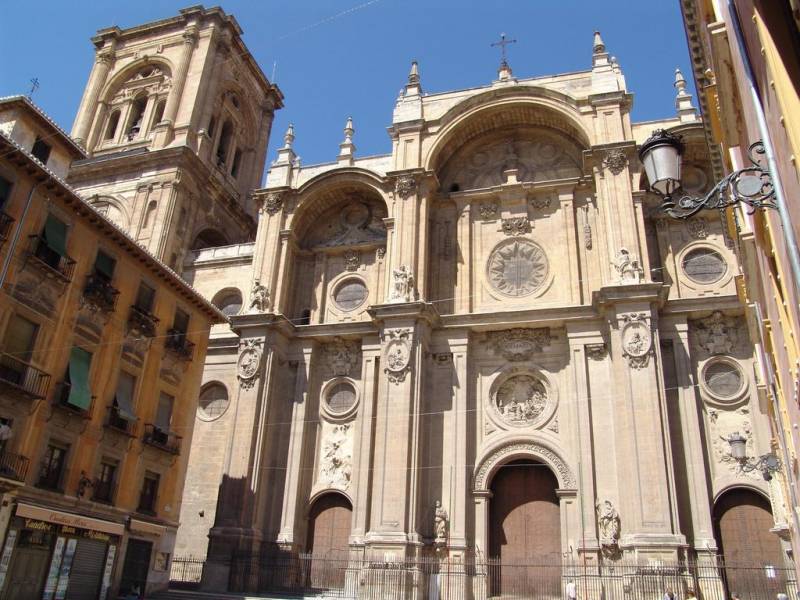 Conquered Granada on January 2, 1492 by the Catholic Monarchs, Granada becomes the center of the New Spain.

The royal Chapel, funerary chapel of Isabel and Fernando, masterpiece of the Gothic Elizabethan and entrance door of the Renaissance in Granada and the cathedral, the Imperial Dream and the best example of Baroque Granada. Not only will you know the Christian Granada, but you will also discover the still very present footprint of the medieval period taking a stroll through the alcaicería, silk and spices market of the Muslim Granada, the madrasa: Koranic School-University of the 14th century and the Corral del Carbón (Coal farm), the Alhóndiga-Caravansar best preserved of all Spain.

If you wanted to, Granada,

To you I would get married;

I’d give you coins and dowry to Cordoba and Sevilla.

Married I am, King Don Juan,

I am married, not a widow;

The moor whose wife I am,

Very much loved me...

A mythical city that gives us much more than the Alhambra. And while the visit to the Alhambra is unavoidable, a sin would be to leave without knowing the heart of a pulsating city, full of history.

Of it Luis de Góngora wrote:

City, in spite of the time,

So populous and so big

That of its ruins alone

Other cities will be honored!

In 1492 and in Granada, history changed its course. From the hand of the Catholic monarchs ends the Middle Ages with the taking of the city and begins the modern age with the signing of the capitulations of Santa Fe, key that allowed Christopher Columbus to undertake a dream: discovering a New World. Granada offers us a walk through history and live it. Traces still indelible of a medieval past that coexist with the splendor of the Renaissance and the Baroque.

The Royal Chapel opens a window to the 16th century, a time of change, of styles coming from Europe. From Gothic to Renaissance stands in the heart of the city the Royal Chapel of Saints John. A funerary chapel for the eternal Rest of Elizabeth I of Castile and Ferdinand II of Aragon and V of Castile. A monumental gothic lattice, an altarpiece in transition between the Gothic and the Renaissance as an open book where we can tell the history of the life and Passion of Christ, the Saints John and the Granada.

At the foot of the altarpiece and on the crypt, in white Carrara marble the two majestic mausoleums, that of the Catholic kings of the Italian Doménico Fancelli and that of the Kings Juana I and Felipe I, successors of Elizabeth and Ferdinand on the throne of Castile, from the Spaniard Bartolomé Ordóñez.

The sacristy-Museum offers an important collection of textiles, pieces of goldsmith and especially the one that originally was the private collection of painting by Queen Elizabeth with masterpieces of the Flemish or Italian school.

Next to the royal Chapel stands the Monumental Cathedral of Granada, founded in the time of the Catholic monarchs but that will live its moment of splendor of the hand of the Emperor Charles V and finally of the hand of the school of Granada Baroque with Alonso Cano. A cathedral conceived as an imperial pantheon to which it owes its monumentality with five naves and vaults that reach up to 45 meters of height in the main chapel. Enrique Egas, Diego de Siloé or Alonso Cano among others managed to raise a great masterpiece of architecture.